Today, I found out some amazing news. According to Time magazine, Mattel Releases A Curvy, Petite, And Tall Barbie. Mattel has been under fire lately because people felt that they were not making dolls in the true image of what girls look like. We live in a world where everyone is not thin. We come in all shapes, sizes, and skin tones and Mattel was not representing diverse body images with Barbie. Well, finally, it was announced today via Time magazine that Mattel will release 3 new Barbies. There will be a petite, tall, and curvy Barbie.

According to Kim Culmone, who is the head of design, she challenged her team by asking them, If you could design Barbie today, how would you make her a reflection of the times? Out of that came changing Barbie’s face to have less makeup and look younger, giving her articulated ankles so she could wear flats as well as heels, giving her new skin tones to add diversity, and then of course changing the body. While curvy Barbie’s hips, thighs and calves are visibly larger than before, from the waist up she is less Jessica Rabbit than she is pear-shaped. Mattel refuses to discuss the actual proportions of the new dolls or how it came to decide on them.

Can you believe that! By asking her team a simple question, new, more realistic Barbies were born and all I have to say is well done. We live in such a diverse world that toys should reflect that. I remember how hard it was back in the day just to find a black Barbie. Our children, the youth of today should be able to see images that they can identify with. This is excellent news and a great new beginning for Mattel and Barbie. I will definitely be getting one for my niece and myself. No shame! 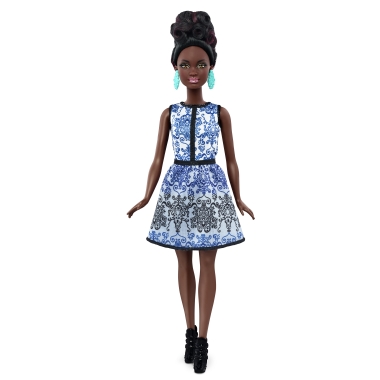 There is also an article on Time about parents reactions to curvy Barbie during a Mattel focus group (read HERE). Author of the article, Eliana Dockterman said, that, “Changing the body was the #1 request from moms when it came to Barbie.” Eliana also said, The term “petite” was more controversial among moms that Mattel surveyed than “curvy” was. Some moms assumed “petite” would mean even skinnier than original Barbie, when actually it means shorter. However, moms preferred “petite” to “short.”

She also found that in the focus group Mattel conducted, Girls will not say “fat” in front of a strange adult—or at least the girls in the focus groups I watched would not. While some girls called the curvy doll “fat” to their playmates, they used more P.C. terms like chubby when the moderator re-entered the room. Mattel researchers say this has changed even in the last three years probably because of anti-bullying curricula that are being introduced as early as kindergarten.

Ultimately, her observation found that girls want dolls that look like them. While watching the focus group, she said, Perhaps unsurprisingly, many of the girls were attracted to the dolls who looked most like them in terms of skin color and hair texture.

I am not surprised at all about her observations of the focus group. What we see on TV and magazines affect what we deem attractive. Showing diverse skintones and body images is a insurmountable step in the right direction.

The new Barbies will be exclusively sold online.

What do you guys think about this? Excited?