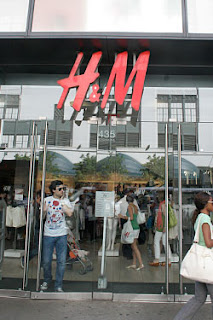 Finally H&M responds to why the 34th street store was cutting up clothes and throwing them away, but, the response sounds rehearsed.
Check it out:
“It will not happen again,” said Nicole Christie, a spokeswoman for H & M in New York. “We are committed 100 percent to make sure this practice is not happening anywhere else, as it is not our standard practice.”
Ms. Christie said it was H & M’s policy to donate unworn clothing to charitable groups. She said that she did not know why the store on 34th Street was slashing the clothes, and that the company was checking to make sure that none of its other stores were doing so.

In my opinion the response comes a little too late. Once they were contacted by the NYT a general response should have been made immediately and then a more detailed response should have come atleast a few hours later. They should have called the store manager at 34th street to get their side of the story and then damage control should have been in full effect. The NYT tried to reach H&M 10 times and they received no response. Obviously, there must be some truth to this and they were just caught with their pants down.

Not only do I believe this will happen again, I believe they will try to find a better way to destroy the clothes that doesn’t leave a trail. The bottom line to me is that someone at corporate had to give them the okay to cut up and throw away the clothes. Why would the store do this on their own?

Let me know your thoughts?